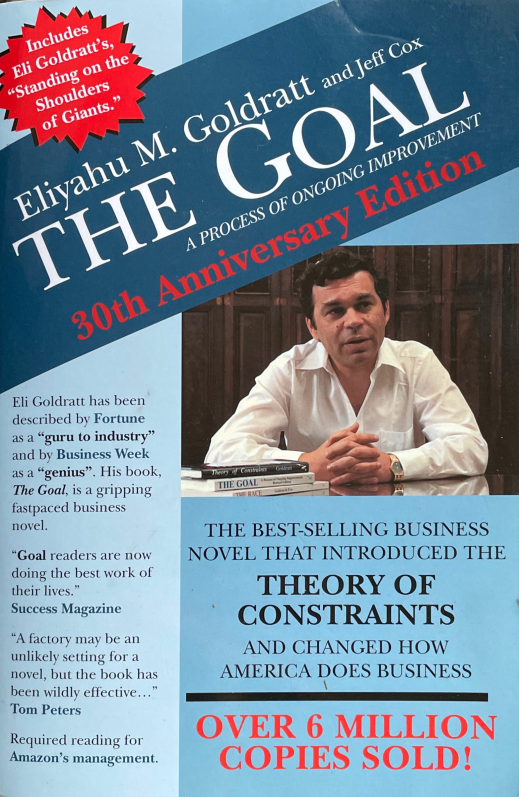 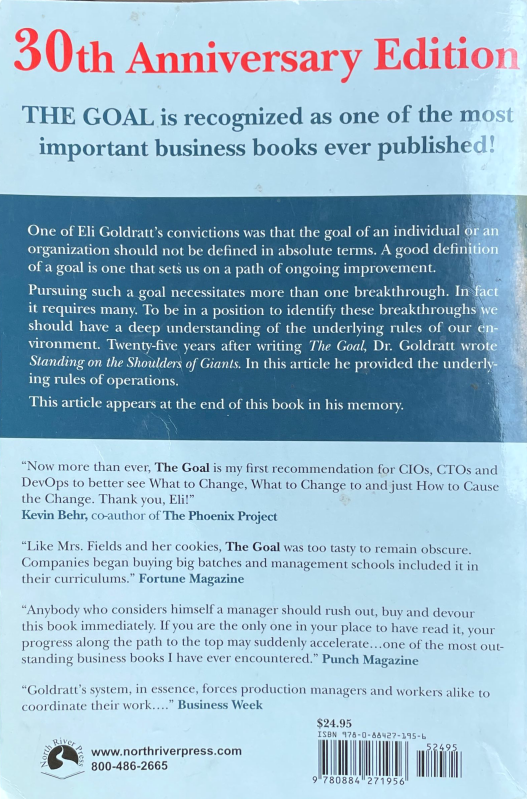 So this is the goal:

They’re measurements which express the goal of making money perfectly well, but which also permit you to develop operational rules for running your plant. There are three of them. Their names are throughput, inventory, and operational expense.

Throughput is the rate at which the system generates money through sales.   …. Through sales – not production. If you produce something, but don’t sell it, it’s not throughput. Got it?

The next measurement is inventory. Inventory is all the money that the system has invested in purchasing things which it intends to sell.

Operating expense is all the money the system spends in order to turn inventory into throughput.

Direct labor shouldn’t be a part of inventory because the time of the employees isn’t what we’re really selling. We ‘buy’ time from our employees, in a sense, but we don’t sell that time to a customer – unless we’re talking about service.

Money for knowledge depends on what the knowledge is used for. It it’s knowledge which gives us a new manufacturing process, something that helps turn inventory into throughput, then the knowledge is operation expense. If we intend to sell the knowledge, as in the case of a patent or a technology license, then it’s inventory. But if the the knowledge pertains to a product which UniCo itself will build, it’s like a machine – an investment to make money which will depreciate in value as time goes on.

A plant in which everyone is working all the time is very inefficient.

A balanced plant is essentially what every manufacturing manager in the whole western world has struggled to achieve. It’s a plant where the capacity of each and every resource is balanced exactly with demand from the market.

There is a mathematical proof which could clearly show that when capacity is trimmed exactly to marketing demands, no more and no less, throughput goes down, while inventory goes through the roof. And because inventory goes up, the carrying cost of inventory – which is operational expense – goes up.

… it’s an accumulation of slowness – because dependency limits the opportunities for higher fluctuations.

The maximum of deviation of a preceding operation will become the starting point of a subsequent operation.

We shouldn’t be looking at each local area and trying to trim it. We should be trying to optimize the whole system. Some resources have to have more capacity than others. The ones at the end of the line should have more than the ones at the beginning – sometimes a lot more.

Where does market demand come in? There has to be some relationship between demand and capacity. … Yes, but as you already know, you should not balance capacity with demand. What you need to do instead is balance the flow of product through the plant with demand from the market. Let me repeat it for you: Balance flow, not capacity.

The idea is to make the flow through the bottleneck equal to demand from the market. Actually, the flow should be a tiny bit less than the demand. Because if you keep it equal to demand and the market demand goes down, you’ll lose money.

Put Quality Control in front of the bottlenecks.

The actual cost of a bottleneck is the total expense of the system divided by the number of hours the bottleneck produces.

How is the time of a bottleneck wasted? One way is for it to be sitting idle during a lunch break. Another is for it to be processing parts which are already defective – or which will become defective through a careless worker or poor process control. A third way to waste a bottleneck’s time is to make it work on parts you don’t need.

We must not seek to optimize every resource in the system. A system of local optimums is not an optimum system at all; it is a very inefficient system.

Keep the kid at the front of the line from walking faster than Herbie. If we can do that, then everybody will stay together.

If you consider the total time from the moment the material comes into the plant to the minute it goes out the door as part of a finished product, you can divide that time into four elements.

One of them is setup, the time the part spends waiting for a resource, while the resource is preparing itself to work on the part.

Another is process time, which is the amount of time the part spends being modified into a new, more valuable form.

A third element is queue time, which is the time the part spends in line for a resource while the resource is busy working on something else ahead of it.

The forth element is wait time, which is the time the part waits, not for a resource, but for another part so they can be assembled together.

An hour saved at a non-bottleneck is a mirage.

The entire bottleneck concept is not geared to decrease operating expense, it’s focused on increasing throughput.

The real question: how does one go about identifying the system’s constraint?

What are we asking for? For the ability to answer three simple questions: ‘what to change?’, ‘what to change to?’, and ‘how to cause the change?’ Basically what we are asking is for the most fundamental abilities one would expect from a manager. Think about it. If a manager doesn’t know how to answer those three questions, is he or she entitled to be called manager?

An intuitive way to achieve better flow is to limit the space allowed for inventory to accumulate.

Flow lines fly in the face of conventional wisdom; the convention that, to be effective, every worker and every work center have to be busy 100% of the time.

Unfortunately, the improvements efforts of other companies [vs Toyota] are misguided since they are aimed at achieving cost savings rather than being totally focused on improving the flow.

The end result of focusing on flow and ignoring local cost considerations is a much lower cost per unit.

One of the ramifications of concentrating on cost reduction is that almost all initiatives to foster a process of an on-going improvement quickly reach a point of diminishing returns and as a result many deteriorate to lip service.

In summary, both Ford and Ohno followed four concepts (from now on we’ll refer to them as the concepts of flow):

We now realize that: 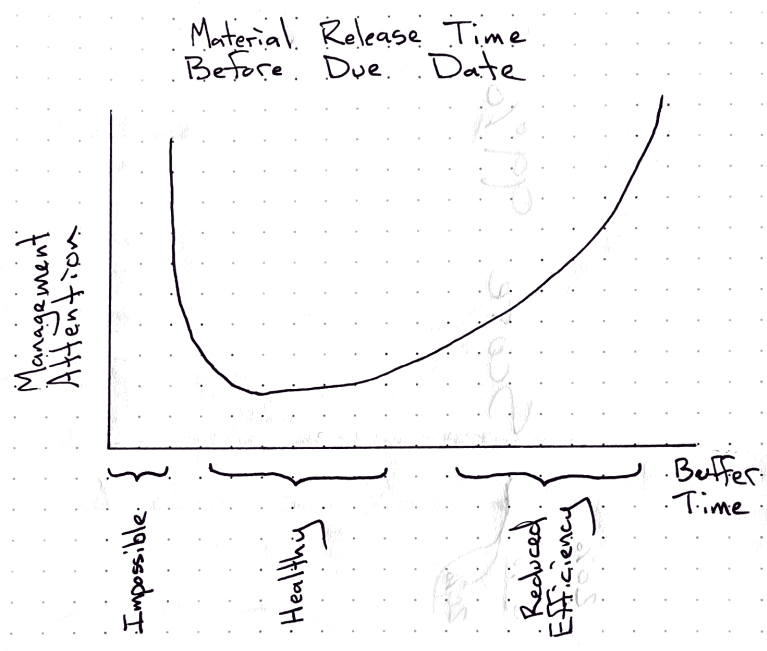 We shouldn’t accept the size of batches as given; that economical batch quantities are not economical and instead we should and can strive to reach a one-piece flow. It is easy to realized that when a batch of parts is being processed (except in processes like mixing or curing) only one item is actually worked on while the other items in the batch are waiting. That means that in conventional companies that use batch sizes of more than ten unites in a batch (which is the case in the majority of production environments) the touch time is actually less than 1% of the lead time.

A good starting point for improving flow will be to choose the time buffer to be equal to half the current lead time.

Trying to be more accurate than the noise (in our case, trying to use sophisticated algorithms that consider every possible parameter in an environment of high variability) does not improve things but makes them worse.

The first step in balancing the flow is relatively easy. Choking the release of material exposes the abundant excess capacity that was masked before.