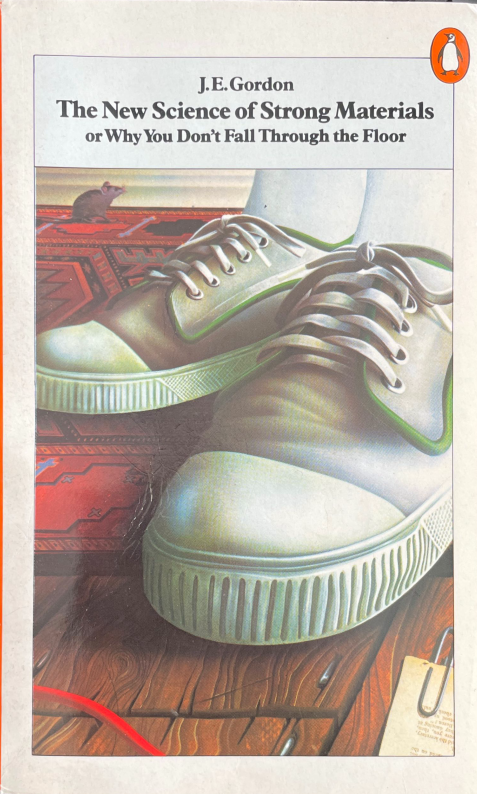 Tagline: or Why You Don’t Fall Through the Floor 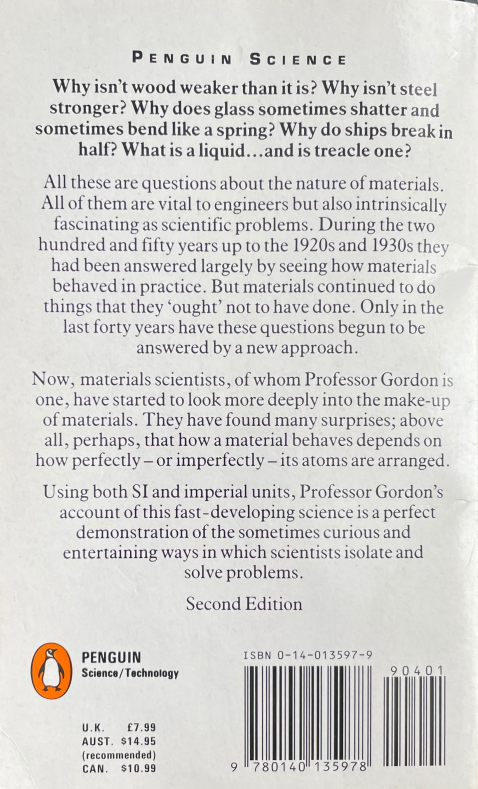 the smallest particle one can see with the naked eye is about 500,000 atoms across.

For a long time “practical” engineers went on as they always had done, by rule of thumb.

voussoirs – the wedge shaped pieces which make up the arch

All engineers know about stress concentrations but a good many don’t really in their hearts believe in them since it is clearly contrary to common sense that a tiny hole should weaken a material just as much as a great big one.

devitrification – the process of crystallization in a formerly crystal-free (amorphous) glass. The term is derived from the Latin vitreus, meaning glassy and transparent.

[of impurities in solids] A useful application of this weakening effect occurs when we add antifreeze to the water in a car radiator. It is true that the glycol does depress the freezing point of the resulting mixture considerable and so postpones freezing but, when this eventually does happen, the result is a mushy ice without mechanical strength which is unlikely to do much harm to the engine.

It will be noticed that, very approximately, the theoretical shearing stresses are generally lower than the theoretical tensile stresses. Thus, near perfect specimens tend to fail in shear if they can reach very high stresses, as we have seen in the case with glass.

Copper tubes must be annealed after bending to shape or they will be brittle.

The worst sin in an engineering material is not lack of strength or lack of stiffness, desirable as these properties are, but lack of toughness, that is to say, lack of resistance to the propagation of cracks.

Thus mild steel structures, for instance, can generally put up with cracks at least a meter long without breaking.

Very, very roughly, the cost of “industrial” timber is about the same as that of commercial mild steel per pound.

As trees grow, the fibers grow in a helical angle between about 6° and 30°.

The cellophane which is made for wrapping and packaging is therefore protected by a very thin coating, on each face, of a water-resistant lacquer. This gives sufficient protection for its ephemeral purpose but, after prolonged wetting, such materials are hopelessly weak, whereas natural celluloses retain a good part of their strength.

Immediately before mechanical failure, and before any weakness can be distinguished by mechanical methods, wood becomes both birefringent and easily stained by characteristic dyes.

Wood cellulose is similar to a bundle of drinking straws glued together.

In most cases wood is used in bending and the result of gradual crushing on the compression side of a beam is to transfer load to the tension side. In this way, the nominal stress in a wooden beam before actual collapse occurs may be up to twice the true compressive stress.

Timber creeps. The creep of wood is the reason why one must not leave a wooden bow or a violin tightly strung.

Wood is affected by liquid water, but bending wood is mostly due to elevated temperatures, not the presence of water.

Thoroughly wet wood has something like a third of the strength and stiffness of completely dry wood.

Traditionally, wood was seasoned “naturally” in the open air or in open, unheated sheds. This might take a year or so for planks an inch or two thick and seven years for large oak ship’s timbers.

Origin of the phrase “devil to pay”. Hot pitch was poured into the seams (payed) between the planks during ship construction. The Devil, incidentally, was a particular seam and the correct expression is “the Devil to pay and only half a bucket of pitch”.

With all reputable glues the joint, when properly made, is stronger than the surrounding wood. 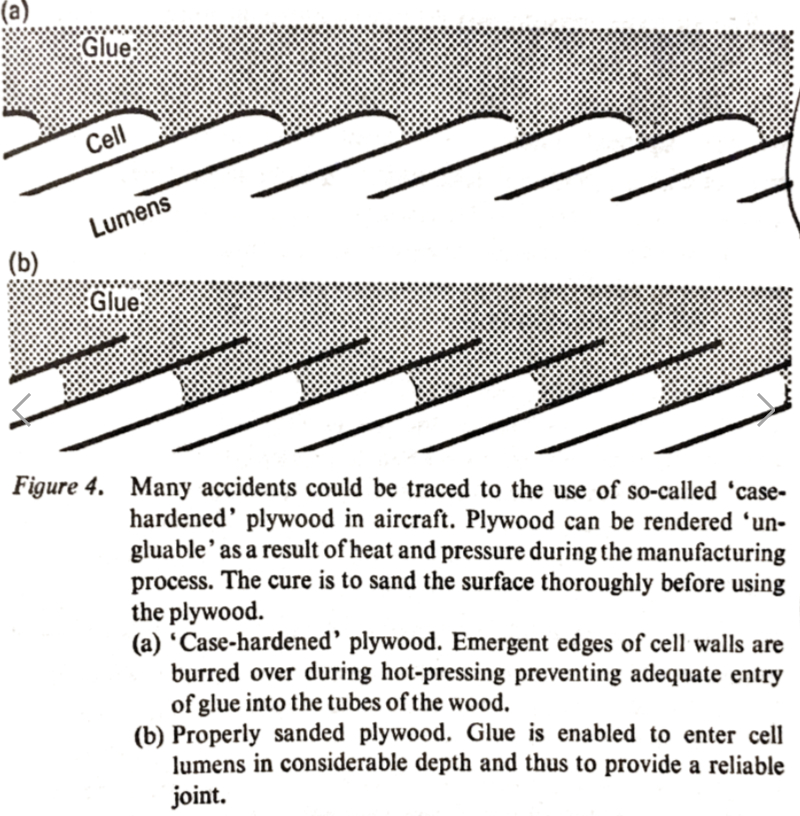 Whenever a fiberglass article has suffered from a blow the material in that region, through not broken, usually turns white. This whiteness is due to the reflection of light from the surfaces of the many internal cracks.

pg 190, use steel for large ships and fiberglass for small ones. This is because steel walls become too thin to be practical on small ships.

For a great many years, steel and aluminum alloys and magnesium and wood (and latterly titanium) have competed with each other in the aircraft industry on roughly level terms. If you design airframes for the same aircraft in any or all of these materials they are apt to come out at much the same weight [because the modulus of elasticity over the specific gravity of these materials are roughly the same].

Superfibers usually fall into one of two broad categories, whiskers and continuous fibers.

Carbon fibers are not, in fact, particularly strong; if anything they are a little weaker than glass fibers. They are however, for their weight, something like eight times as stiff as either glass or the normal engineering materials.

Greek colonists at Akragas (Agrigentum) in Sicily were using iron reinforcing members [in marble] fifteen feet long and of five by twelve inch cross section as early as 470 B.C.

A bond can be broken by chemical, physical, or mechanical means or by any combination of these causes acting additively. Points of high stress are especially liable to attack by solvents or to corrosion by chemicals.

Cracks. To relieve the stress concentration adequately, there has to be slip on five planes in all.

Iron. The elementary facts about iron and steel tend to be obscured by the jargon of the trade. First of all there is a confusion about what is meant by “iron” and “steel”. Naturally in both cases the predominant chemical element is iron. “Iron” by itself usually means iron in the relatively pure chemical form. “Cast Iron” on the other hand means iron containing nearly as much carbon as it will hold, perhaps about four percent. “Wrought iron” is different again and is usually a special sort of fairly pure iron containing glassy inclusions. “Steel” usually means iron with a little carbon in it. generally less than 1 percent.

The amounts of carbon present in iron and steel appear surprisingly small considering the effect which they have upon the material. It is to be remembered however that the proportion of carbon in iron is always quoted as a percentage by weight and that the carbon atom is much lighter than the iron atom – roughly a fifth of the weight. The percentage of carbon by volume, or by numbers of atoms, is thus considerably larger and may reach about twenty percent.

The rust resistance of wrought iron is generally excellent. this is partly due to the purity of the iron itself but many people hold that the initial film of rust is anchored to the surface of wrought iron by means of the slag inclusions so that it remains to form a protective skin instead of dropping off to make way for fresh corrosion as it generally does in with steel.

Quenching can be done in water and it usually is but, historically, there seems to have been a preference for using urine and other biological liquids.

Another sort of tempering of iron is also made in this manner, by which glass is cut and also the softer stones. Take a three year old black goat, and tie him up for three days within doors without food; on the forth day give him fern to eat and nothing else. When he shall have eaten this for two days, on the night following enclose him in a cask perforated at the bottom, under which holes place another sound vessel in which thou wilt collect his urine Having in this manner for two or three nights sufficiently collected this, turn out the buck, and temper [that is really, quench] thine instruments in this urine. Iron instruments are also tempered in the urine of a young red-headed boy harder than simple water. – Theophilus Presbyter (eleventh century), Scheme of various arts, translated by Hendrich, 1847.

When water is poured on hot metal a film of steam is formed so that the liquid water does not actually touch the metal and the heat transfer is consequently bad. This is easily demonstrated by dropping water on the hot plate of an electric cooker. With urine, however, crystals are formed on the surface of the metal as the water evaporates and these tend to bridge the steam gap and improve the heat flow. Furthermore, urine contains urea and ammonia both of which are nitrogen compounds. There was therefore some degree of nitriding of the surface, that is nitrogen diffused into the iron. This formed hard needle crystals of iron nitride, Fe2N, and, also individual nitrogen atoms insinuated themselves into the iron lattice as what are known as interstitials. Interstitial atoms pin dislocations. As a matter of fact the degree of nitriding effected during quenching is very small. In modern commercial practice periods of two or three days in urea or ammonia are needed, for this reason it is a rather expensive treatment, used where only the best will do.