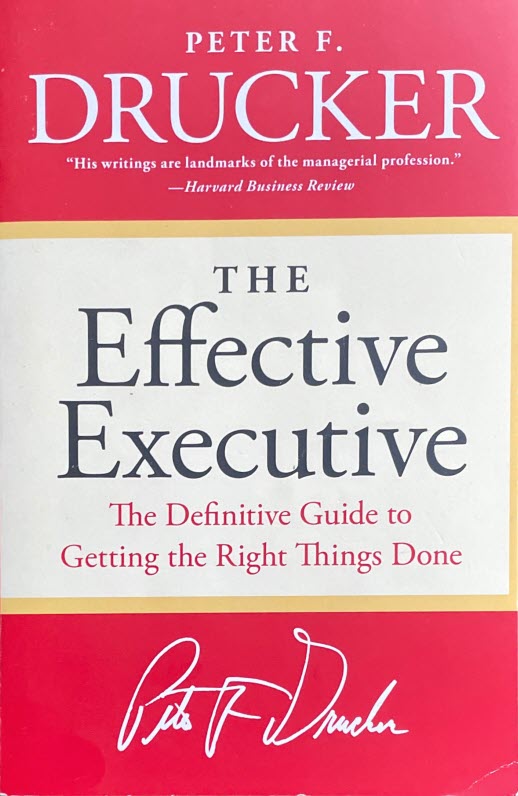 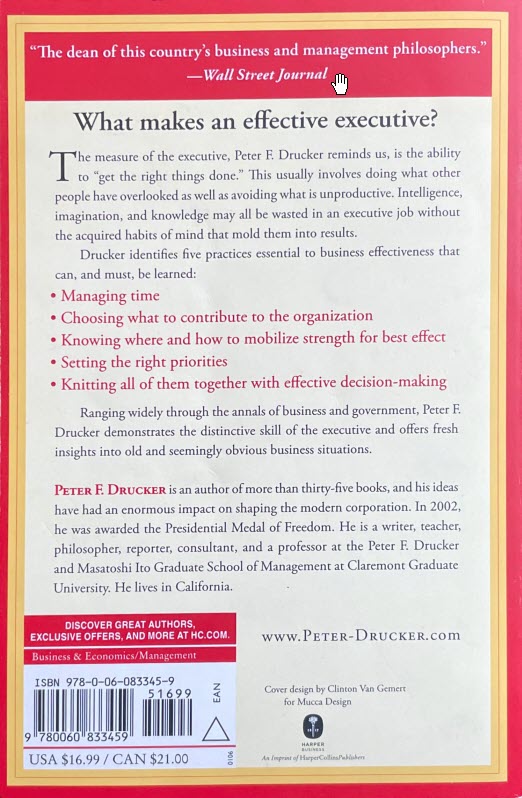 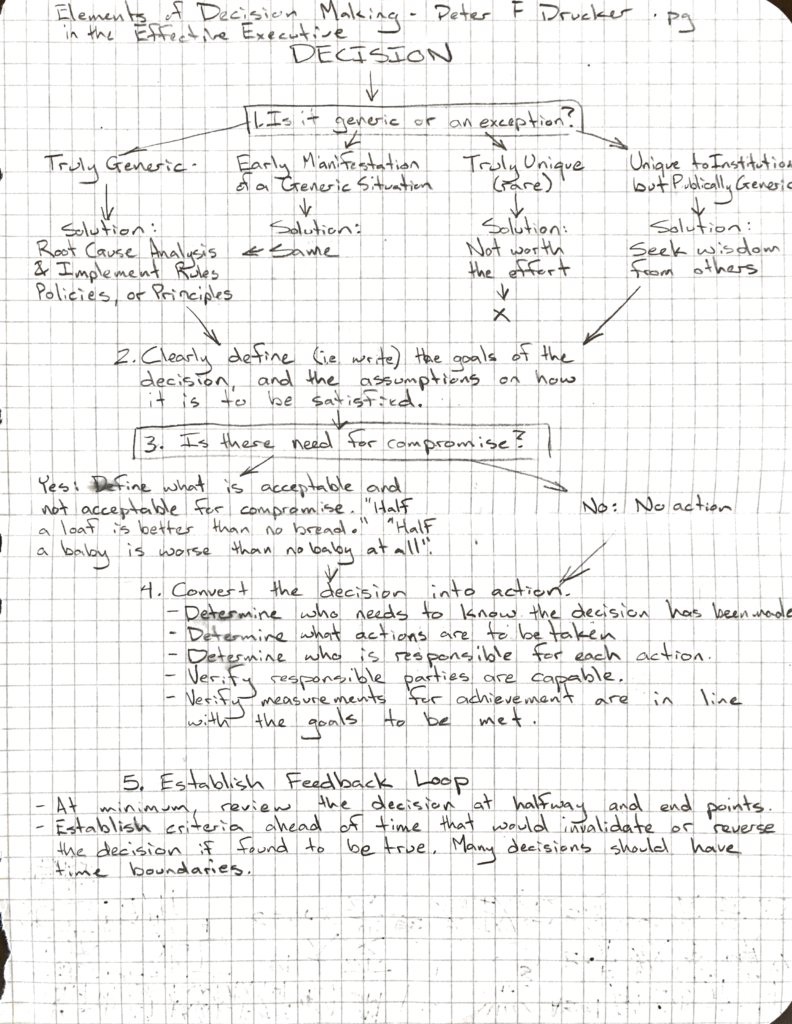 Introduction: What Makes an Effective Executive?

I have never encountered an executive who remains effective while tackling more than two tasks at any time.

Create a system for checking the results against the expectations. Effective executives usually build two checks into their action plans. The first check comes halfway through the plans time. The second occurs at the end.

Take responsibility for decisions. The decision has not been made until people know: The name of the person accountable for carrying it out, the deadline, the names of the people who will be affected by the decision and therefore have to know about, understand, and approve of it – or at least not be strongly opposed to it – and the names of the people who have to be informed of the decision, even if they are not directly affected by it.

Good executives focus on opportunities rather than problems.

Effective executive put their best people on opportunities rather than problems.

The key to running an effective meeting is the deciding in advance what kind of meeting it will be. Different kinds of meetings require different forms of preparation of different results:

There are four major realities over which the effective executive has essentially no control.Effectiveness is a habit; that is, a complex of practices. And practices can always be learned.

Five habits of the mind that have to be acquired to be an effective executive:

Everything requires time. It is the one truly universal condition. All work takes place and time and uses of time. Yet most people take for granted this unique, irreplaceable, and necessary resources. Nothing else, perhaps, distinguishes effective executives as much as their tender loving care of time.

To be effective effective, every knowledge worker, and especially every executive, therefore needs to be able to dispose of time in fairly large chunks.

Advice on hiring and promotions page 29

The first step toward executive effectiveness is therefore to record actual time use.

Systematic time management is therefore the next step:

We usually tend to over rate rather than underrate our importance and to conclude that far too many things can only be done by ourselves.

Some senior man work at home one day a week.

Other men schedule all the operating work – the meetings, reviews, problem sessions, and so on – for two days a week, for example, Monday and Friday, and set aside mornings other remaining days for consistent, continuing work on major issues.

Another fairly common method is to schedule a daily work period at home in the morning.

Chapter 3: What Can I Contribute?

The effective executive focuses on contribution.

Work in the right direction before working harder.

The man of knowledge has always been expected to take responsibility for being understood. My notes: This is also known as the curse of knowledge.

The effective man always states at the outset of a meeting the specific purpose and contribution it is to achieve. He makes sure that the meeting it’s addresses itself to this purpose. He does not allow a meeting called to inform to do generate into a “full session” in which everyone has bright ideas. But a meeting called by him to stimulate thinking and ideas also does not become simply a presentation on the part of one of the members, but is run to challenge and stimulate everybody in the room. He always, at the end of his meetings, goes back to the opening statement and relates the final conclusions to the original intent.

The executive who is concerned with what a man cannot do rather than what he can do and who therefore tries to avoid weakness rather than make strength effective is a weak man himself.

The really “demanding boss” – and one way or another all makers of men are demanding bosses – always starts out with what a man should be able to do well – and then demands that he really do it.

My notes: don’t create job titles based on personalities, fill needs with talent congruent with the need.

Effective executives keep a distance between themselves and their close colleagues.

Four rules to staff for strength without stumbling into the opposite trap of building jobs to suit personalities:

How do I manage my boss?

Above all, the effective executive tries to make fully productive the strength of his own superior.

Effective executive stew first things first and they do one thing at a time.

There are always more important contributions to be made then there is time available to make them.

To get even that half-day or those two weeks of really productive time requires self-discipline and an iron determination to say no.

The people who get nothing done underestimate the time for any one task. Effective executives therefore allow a fair margin of time beyond what is actually needed.

One hires new people to expand on already established and smoothly running activity.

New term: “posteriorities” – opposite of priorities, deciding what tasks not to tackle.

The most important thing about priorities and posteriorities is, however, not intelligent analysis but courage.

Concentration – that is, the courage to impose on time and events his own decision as to what really matters and comes first – this is the executive’s only hope of becoming the master of time and events instead of their whipping boy.

Chapter 6: The Elements of Decision-Making

Make decisions as a systematic process with clearly defined elements and in distinct sequence of steps.

1. The clear realization that the problem was generic and could only be solved through decision which established a rule, the principle. Distinguish between four different types of occurrences.

The effective decision-maker always assumes initially that the problem is generic.

This also explains why the effect of decision-maker always tries to put is the solution on the highest possible conceptual level. He does not solve the immediate financing problem by issuing whatever security would be easiest to sell at the best price for the next few years. If he expects to need to Capital Market for the foreseeable future, he invents a new kind of investor and designs the appropriate security for mass Capital Market that does not yet exist. If he has to bring into line a flock of undisciplined but capable divisional presidents, he does not get rid of the most obstreperous ones and buy off the rest. He develops a constitutional concept of large-scale organization. If he sees his industry is necessarily monopolistic, he does not content himself with fulminating again socialism. He builds the public regulatory agency into a deliberate “third way” between the Charybdis of irresponsible private enterprise and check by the competition and the service of equally irresponsible, indeed essentially uncontrollable, government monopoly.

3. One has to start out with what is right rather than what is acceptable.

There are two different kinds of compromise. “Half a loaf is better than no bread.” “Half a baby is worse than no baby at all.”

4. Convert the decision into action.

Converting a decision into action requires answering several distinct questions: Who has to know of the decision? What action has to be taken? Who is to take it? And what does the action have to be so that people who have to do it can do it?

All this becomes doubly important when people have to change behavior, habits, or attitudes if the decision is to become effective action.

One has to make sure that their measurements, their stands for accomplishment, and their incentives are changed simultaneously.

5. The feedback has to be built into the decision to provide a continuous testing, against actual events, but the expectations that underlie  the decision.

Executive who make effective decisions know that one does not start with facts. One starts with opinions.

The effective decision-maker assumes that the traditional measurement is not the right measurement.

Insist on alternatives of measurement, and choose the one appropriate one.

Alfred P. Sloan is reported to have said at a meeting of one of his top committees: “gentlemen, I take it we are all in agreement on the decision here.” Everyone at the table nodded assent. “Then,” continued Mr. Sloan, “I propose we postpone further discussion of the matter until our next meeting to give ourselves time to develop disagreement and perhaps gain some understanding of what the decision is all about.”

There are three main reasons for the insistence on disagreement. First, it is the only safeguard against the decision-maker’s becoming the prisoner of the organization. Second, disagreement alone can provide alternatives to the decision. Third, disagreement is needed to stimulate the imagination.

The effective decision-maker organizes disagreement. It gives him the alternative so that he can choose and make a decision. And it forces the imagination.

The effective executive is concerned first with understanding. Only then does he think about who is right and who is wrong.

There is one final question the effect of decision-maker asks: “is the decision really necessary?” One alternative is always the alternative of doing nothing.

If the answer to the question “what will happen if we do nothing?” Is “it will take care of itself,” one does not interfere. #donothing

Act if on balance the benefits greatly outweigh the cost and risk; and act or do not act; but do not “hedge” or compromise.

The surgeon who only takes out half the tonsils or half the appendix risks as much infection or shock as if if he did the whole job.

One thing the effective executive will not do at this point. He will not give into the cry, “let’s make another study.” This is the cowards way.

See conclusion pg 166 for a summary of the book.