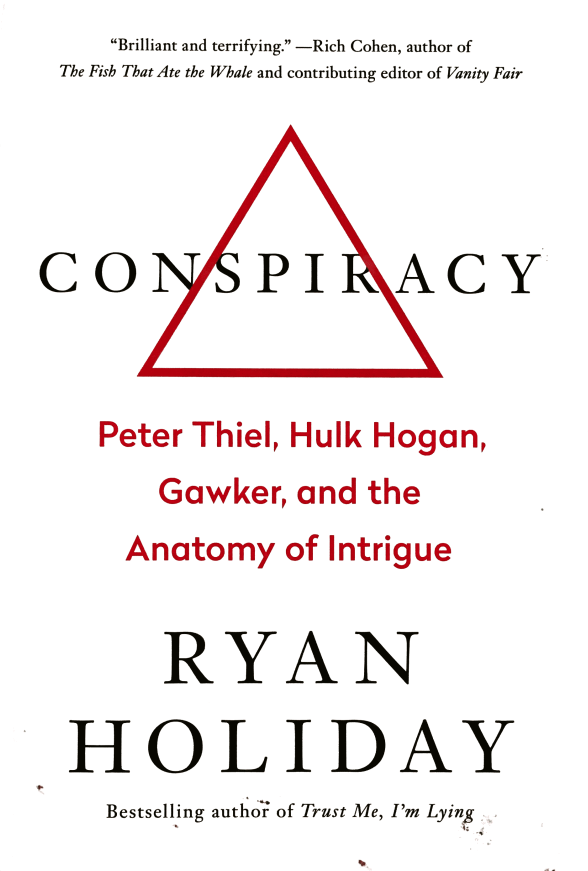 I found this book to be a beautiful insight into how real conspiracies come to fruition, and notes on how to conduct your own. Often we hear of conspiracies in the theoretical realm, from movies or anecdotes that aren’t actually true, but this book gives a front row seat into the intricate details of how the mammoth Gawker Media was taken down by a billionaire and his hidden team. I read this hand in hand with Machiavelli’s “The Prince”, which I would also recommend doing for anyone who reads this book up. They make a good combo.

For the most part, Ryan Holiday does a great job, but he slipped in a disgusting amount of political diatribes and completely unnecessary jabs at ideologies that have nothing to add to the story. If these were absent the book would be a much higher rating for me. It was too long, and could be 25% shorter with the greater effectivity.

This book is a story, so if you are looking for a summary you’ll have to look elsewhere. I’m mainly taking the key points I learned while reading, and make no attempt to summarize what happened. If this line of thinking is interesting to you, I would recommend buying the book. 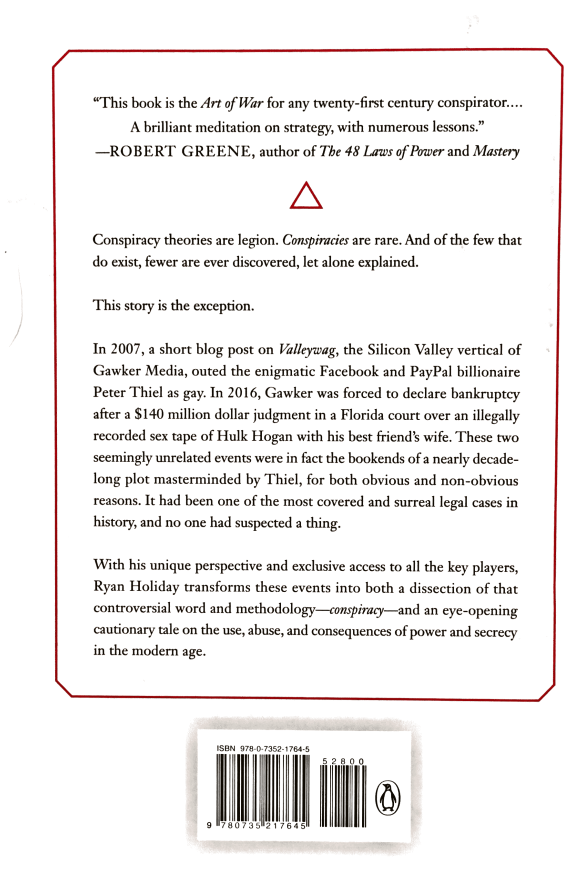 No notes for Chapters 1-3

The conversation has wound itself down naturally and now there is nothing left but for Mr. A to seize the moment. This moment that few get. the chance for a pitch that can change your life. There is something popular with ambitious people called the “briefcase technique.” You don’t show up to a meeting with a few vague ideas, you have a full-fledged plan that you take out of your briefcase and hand to the person you are pitching.

Compartmentalization is key to a conspiracy. Not everyone can be in charge.

Chapter 5: Finding the Back Door

Libel and defamation cases are notoriously hard to win in the American legal system. They are fraught with First Amendment complications where the bias is always toward the publisher and the burden of proof on the claimant – especially if he or she satisfies the “public figure” standard – is overwhelming. A private citizen has to prove only negligence on the part of the publisher. A public figure has to prove “actual malice” – that the publisher either knew beforehand that its statements were false or acted with “reckless disregard” as to the truth of the published statements.

“Anyone who is threatened and is forced by necessity either to act or to suffer becomes a very dangerous man to the prince.” – Niccolo Machiavelli

There is often very little visible forward momentum in a conspiracy.

Machiavelli wrote that fortune – misfortune in fact – aims herself where “dikes and dams have not been made to contain her.”

“The things that I think I’m right about, other people are in some sense not even wrong about, because they’re not thinking about them.” – Peter Thiel

Chapter 10: The Power of Secrets

“We are bred up to feel it is a disgrace to ever succeed by falsehood,” read a plaque on the wall of LCS, the secret division of the British government tasked with its covert operations and intelligence. “We will keep hammering along with the conviction that honesty is the best policy and that truth always wins in the long run. These pretty little sentiments do well for a child’s copybook, but a man who acts on them had better sheathe his sword forever.”

Robert Greene – “The main weakness in any conspiracy is usually human nature: the higher the number of people who are in on the plot, the higher the odds that someone will reveal it, whether deliberately or accidentally.”

Machiavelli warns conspirators. “A word with another meaning is overheard which shakes your courage and makes you think it was said with respect to your plans. The result is that you either reveal the conspiracy yourself by fleeing or you confuse the undertaking by acting at the wrong time.”

Strip your enemy of its allies.

A single attack allows resistance to be concentrated, but two or three or four put the enemy between the horns of a dilemma, choosing between equally subpar options. Or, blindly hoping to avoid one attack, he falls headfirst into the other without even knowing.

Liddell Hart’s maxims for strategy: “Keep your object always in mind, while adapting your plan to circumstances.” “Take a line of operation which offers alternative objectives.” “Ensure that both plans and dispositions are flexible – adaptable to circumstances.” “Do not throw your weight into a stroke whilst your opponent is on guard – whilst he is well placed to parry or evade it.”

Being feared, Machiavelli says, is an important protection against a conspiracy. The ultimate protection, he says, however is to be well liked. Not simply because people who love you are less likely to want to take you down, but because they are less likely to tolerate anyone else trying to, either. If a prince guards himself against that hatred, Machiavelli writes, “simple particular offenses will make less trouble for him … because if they were even of spirit and had the power to do it, they are held back by the universal benevolence that they see the prince has.”

A meta-warning to every would-be conspirator today: beware your allies.

The decision not to simply slip away during the chaos, but instead to give away too many clues by talking about the conspiracy, would come to haunt Peter. It would be his biggest mistake.

Chapter 18: There Are Always Unintended Consequences

E. P. Thompson said that history never happens as the actors suspect, that history is instead the “record of unintended consequences.”